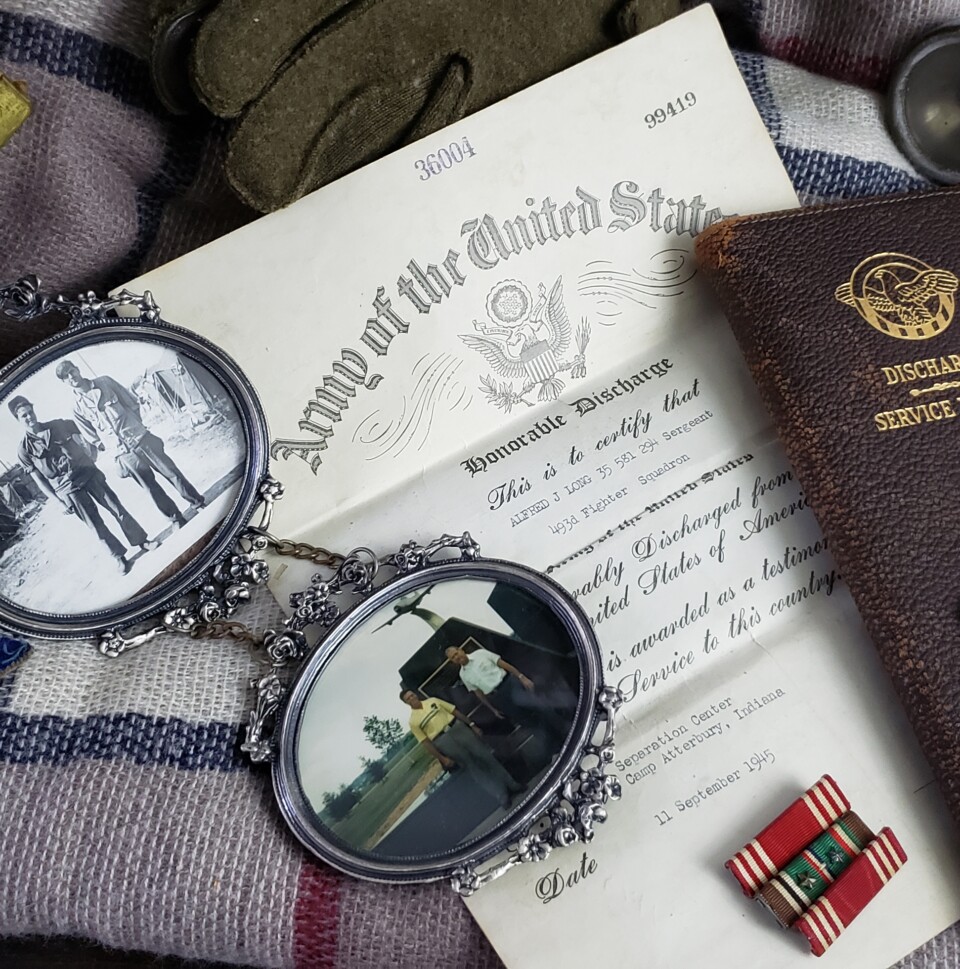 The Making of a Legacy – Part 4: Memory Artifacts

In this 12-part series, we’ll be highlighting the life of a beloved family member: Uncle Al. He was a WW2 Vet, a Ford Motors man, and an amazing storyteller. This is a story about stories, and how those stories had a profound impact on all of us in the golden days of our dearest Uncle Al.

At my Great-Uncle Al’s house, tucked away in a closet, was a shoebox full of treasure. Maybe not the kind of treasure you’d find buried underground, but certainly the kind that should be kept, protected, and passed down. The shoebox was filled with trinkets and “prizes” from his time overseas during WW2. There were coins from the countries he’d visited, patches that went on his uniform, pins he’d taken from captured or deceased Nazi soldiers, aviator goggles, a standard issue (for the time period) pocket can opener, rosary beads, a leather folio containing his discharge papers, his initials engraved into three gold plates that may have once been on his uniform or bag, his dog tags, and his issued flashlight and belts.

I was in awe the first time I saw some of these artifacts—which is significant because as much as I love history, I’m not typically the first person to get massively excited walking through a museum of historical artifacts. This was different because it was personal. Al received these coins while Europe was being torn apart. He’d used this can opener for his meals while he was on the Queen Mary and, I’m sure, on land just a few miles from the enemy. He’d claimed these pins from actual Nazis who had been trying to kill them. This was the flashlight he’d used in the middle of the night as they painted stripes on the planes so they could tell the captured Ally planes from friendly ones. These artifacts just brought home how real Al’s stories were. There was only one photo taken of Al during the War, and it was with his best friend, Joe Bennett. Together, they stand side by side in their mechanic uniforms in whatever camp was their home for the time being.

The way that my husband and I found out about these treasures was purely by chance. A relative had come over to share some old family photos he’d found, and Al ended up bringing out the shoebox and blowing us all away. My husband didn’t know about it. His dad didn’t know about it. And if Al had passed before we knew about it, there was a chance the box could have been lost and never known to any of us. Without Al’s stories of meeting Joe Bennett and becoming best friends during basic training when they were both drafted, that photo would have just been Al standing next to a random soldier. This is why, if you have memory artifacts like photos or trinkets in your family like Al did, it’s so important to document them in some way (photograph them, scan them, take a video of someone talking through what each object is and who’s in each photo, create a document that gives the artifacts context, etc), and then—and this is critical—let as many people in the family know as possible. Tell them that these artifacts exist and that there is some documentation of what the artifacts are. Tell them who is in possession of the artifacts, or where to find them. Otherwise, they could be lost, forgotten, or not even known.

I took Al’s box of treasures home with me for a few days, set up a little mini studio, and photographed them. We had him talk through what some of the artifacts were and recorded that. I scanned the picture of him with Joe Bennett as well as other old photos of the Long family that only Al could identify. His discharge papers, birth certificate, and New York Central Railroad Apprenticeship papers were all scanned in too. Now all of those artifacts—his video files, transcript of those video files, photos, scans, and the photos of his treasure box—are all organized and contained in one digital place, backed up to the Cloud so they can’t be lost. Even if I completely dropped the ball and never told my future kids about their Uncle Al, they (or their kids, or their kids) could still search through our family archive and discover Al, his legacy, and their origins.

Not all families have a shoebox full of World War II memorabilia, but I’d bet that most families do have small artifacts with a story behind them. Think about it. Your present-day artifacts will one day become artifacts of the past. That ornament hanging on your Christmas tree might not seem like an ancient treasure, but when your descendants learn that it was handmade by your mom (maybe their great-great-great grandma), they’re going to think that is so cool and want to keep it and hang it up each year. But how would they know to do that unless some record exists to inform them of its significance? Maybe you have photos—whether they are antique, dated, or were taken yesterday—that mean a lot to you. If you don’t know who’s in those old photos or where they were taken, think about how people in the future will feel about that photo you took yesterday with your family. These memory artifacts can only maintain their story and significance if someone remembers the stories behind them.

What stories do your family treasures hold, and how can you turn them into a legacy? Stay tuned for Part 5, where we’ll talk about oral storytelling in the modern world.

Kara Long is a writer, artist, and musician gone entrepreneur, born in the little historical town of Irvington, Indiana. In her childhood, she experienced several losses of close family members that shaped her future life and interests. Her lifelong passion for writing, music, and art followed her into college, where she studied Music Technology and Media Arts. After graduating, she knew she wanted to do something big and give back to the world in a big way with her skills, talents, and experiences, but wasn’t sure how. When the idea of The Memory Collective came to her in early 2019, she dove headfirst into founding it. Now, she helps people preserve memories of family, heritage, and personal journey through the blending of oral storytelling, analog and digital memory banks, and the arts.

Can Dogs Be Seniors Best Friend?

The Making of a Legacy – Part 10: Everyone Has an Amazing Story

The Making of a Legacy – Part 9: Three Beneficial Reasons to Interview Your Elders