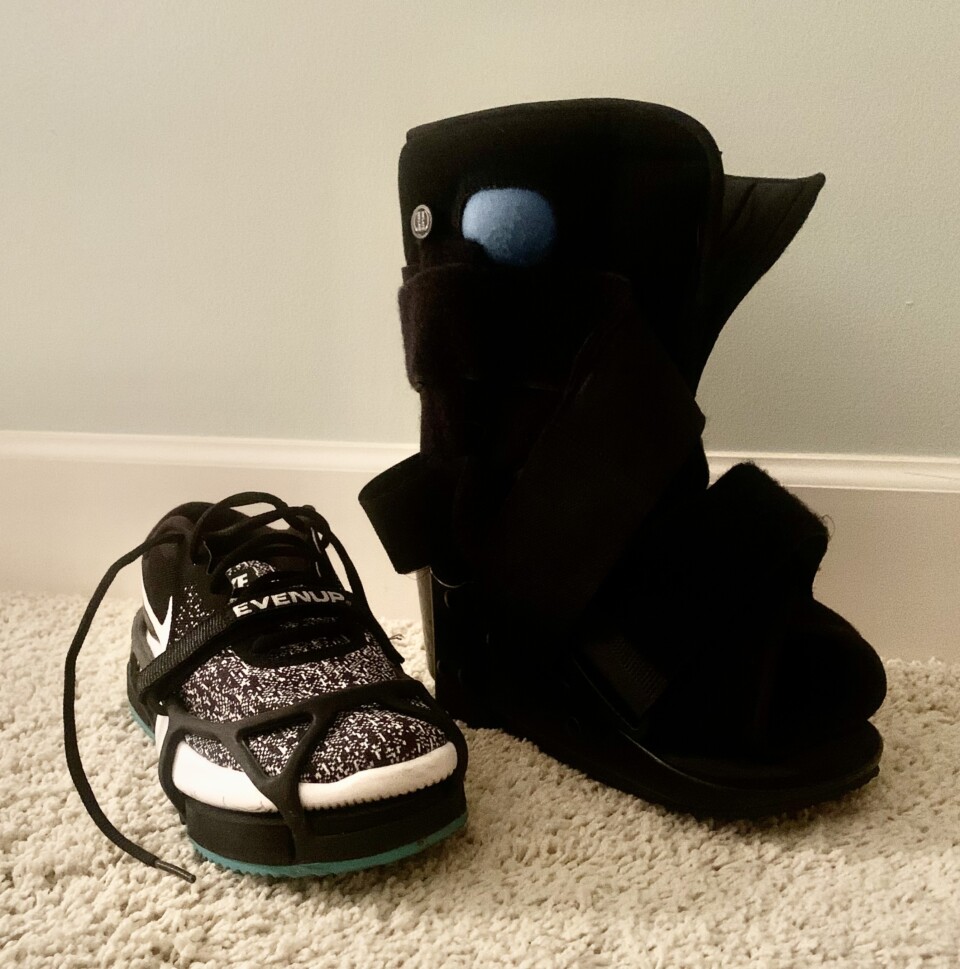 Caste noun:  \kast – A division of society based on differences of wealth, inherited rank or privilege, profession, occupation, or race.

What about age?  Shouldn’t that be included?  Those of us over the age of 55 with brittle bones are often in casts. I know…it’s different. Or is it? My body is certainly different than it was in my 30’s and it’s taking all of my inherited wealth to keep up with medical bills from health professionals that I always seem to be racing off to.

I’ve reached the age where 90% of my conversations with doctors, friends, and sometimes complete strangers are about ailments – itches, glitches, twitches, diseases, and yes, casts. I happen to be wearing one right now due to a stress fracture and/or muscle strain in the top of my left foot.  Not exactly the boot I had envisioned myself wearing this winter.   The good news is due to the air cast, I’ve convinced my boss it was imperative I extend my stay in South Carolina so I would not have to navigate the ice and snow in grey, gloomy Cincinnati.  He took the bait hook, line, and sinker. I will continue to work remotely until the sun shines bright in my home state…which might not be until June.

And that’s just one perk of having a bum foot!

My husband was waiting on me hand and, well, foot for several weeks.  I pushed him over the edge, however, when I called him on my iPhone from the couch while he was downstairs in the garage to see if he could bring me a Mt. Dew and some Cheetos.  He packed up the car and the cat and headed north the very next day.  He claimed it was because he was unable to work remotely and needed to get back to the job site.  I knew better.  Now I have to crawl to the mini-fridge to get a cold soda.  Fortunately, the family-size bag of snacks on the end table next to me is still half-full.   I know eventually, I’m going to have to place an order via the Harris Teeter Express Lane so I can pick up some groceries.   I’ve made a mental note to add a box of Depends to the list so I don’t even have to get off the couch to go to the bathroom.

I did venture out to the grocery the other week because we needed fruit.  I don’t like someone else picking out bananas for my morning smoothie.  Steve dropped me at the door and I only had to hop 17 steps to the complimentary, fully-charged motorized scooter.  I swear the sun was shining on it and the angels were singing.  It was a sweet ride. I revved up the engine and took off like a bat out of hell at 2.5 miles per hour.  I whizzed past the produce and had to back up to grab the 2 for 1 containers of strawberries.  I got a kick out of the beep, beep, beep like a garbage truck while in reverse. I backed up down three entire aisles until I knocked over a display of Bounty.

I’ve discovered that customer service improves when you are incapacitated and several years younger than most on Senior Citizen discount day at the store.  Usually, the young whippersnapper at the register asks me if I’m over 60 (I’m on the cusp), but when you sail through the line in a scooter, he didn’t bother looking up (that might have been because I had rolled over his foot).  I think he gave me the discount to get me out of the store before I did any more damage.

I saved enough money to buy something called the “EVENup Shoe Balancer” on Amazon.  Another friend of mine, Alex, who just got out of a boot, turned me onto this little gem.  She convinced me that if I purchased it, the lift would prevent my back and hip from going all out of whack while in the air cast for six weeks.  She was right.  While I waited three days (I don’t have Prime) for the EVENup to arrive, I could feel a couple more glitches coming on to tell my friends about.  Once I strapped the contraption to my gym shoe, I no longer had the gait of Quasimodo.  Now I walk like Frankenstein but I feel like Cinderella in this beautiful rubber slipper.  If only that company could come up with an EVENup bra, I’d be set!

The orthopedic doctor I found online is a really nice man named Dr. Tom Thomas (the nurse actually called him Tom-Tom. I guess he beats to a different drum). I liked him because he told me I could start easing out of the boot in the next week or so.  He recommended a good pair of sturdy shoes (good sturdy shoes equate to ugly and expensive).  I’m headed to “Nuns-R-Us” to see what they have in a size 6.5.  I pray Sister Plantar Fasciitis will be working so I can receive my free blessing with every purchase.

My latest ailment has opened up a whole new world of conversation with friends.  I can now keep up with Lynette who is recovering from Omicron, Tammy’s torn meniscus, and Mark, who had open-heart surgery just in time for Valentine’s Day. I can hardly wait to tell them I met my health-insurance deductible AND used up my entire FSA allotment and it’s not even March!