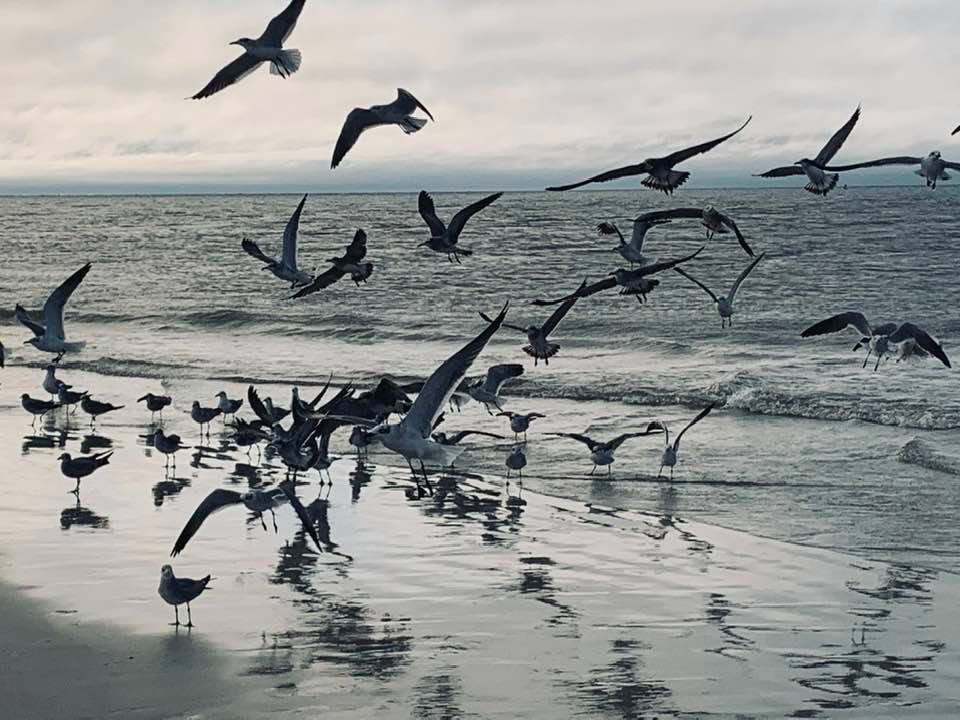 One of my favorite songs from White Christmas is “Snow” where Bing, Rosemary, Danny and Vera gleefully sing together in the bar car about the frozen flakes. Quite frankly, I have to admit the only thing frozen I like in a bar car – or anywhere else for that matter – is margaritas.  I don’t snow ski, snowboard, make snow angels, pet snow leopards, or eat snow crab legs (not because they are not delicious, but I’m too lazy to work that hard for my food).  I avoid shoveling snow whenever possible and it’s been decades since I’ve seen Snow White. What I’m saying is I try to avoid anything snow-related whenever possible.

So a few years ago I began migrating to South Carolina during the coldest and grayest of winter months. Which gets me thinking, where did the years go between listening to Lynyrd Skynyrd Free Bird to packing my Honda and heading south like Snowbird?

The first two years were phenomenal. At sunrise I’d walk the beach, tickled the only white stuff under my feet was sand.  I’d bask in the sunshine on the deck in the afternoon and occasionally post pictures on social media just to rile my friends back in Ohio.  This year due to the pandemic, I’ve been in Hilton Head since Christmas.   Sadly, 2021 at the beach is playing out like the movie, Fifty Shades of Grey.  If it weren’t for the palm trees outside my window, I’d swear I was in Cincinnati, Seattle or very possibly London, with all of the fog, gloom and drizzle.

All the locals are claiming it’s the worst winter on record and I can honestly say it’s the worse I’ve experienced.  We’ve seen the sun only a handful of days since New Year’s Day, just twice in February, and according to the pretty meteorologist in the purple dress on WSAV that I’d personally like to strangle, we may see a glimpse this coming Wednesday before storms move back in on Thursday.  Honestly, I think she’s just saying that to prevent mutiny.  My husband and I are heading off the island to Lowes this morning to pick up enough lumber to start on the ark.

I did feel a bit better when a neighbor back in Ohio texted a picture of our house blanketed in white.  It was very beautiful from 685 miles away.

At the beginning of the season, many people look forward to snow.  I know I used to when I was in grade school and there was a chance for a snow day. But not anymore.  Especially when the weather people use the word “historical” in the same sentence as snow accumulation.

Watch what you wish for!

I learned that the hard way.  Years ago I was stressed out at work and praying I could take some time off. Like permanently.  After complaining about my job to my husband at dinner, I took a bike ride, flipped over the handlebars, broke my wrist in seven places, had surgery and was promptly granted several weeks medical leave.  Prayers answered!

I’ve since learned to be more specific.

“Dear God, can I please win the Powerball next week so I can donate $1 million dollars to the 2021 Walk to End Alzheimer’s as not feel guilty when I retire? Also please make the winnings be enough so I can be part owner in a private jet to fly back to Cincinnati on days where there is no snow and if it’s not too much to ask, could you throw in a boat complete with a captain and crew? And of course, a cure for cancer and peace on earth.  In the name of the Father, Son and Holy Spirit. Amen!”

I hear Steve honking in the driveway.  He’s either ready to head out on errands or the CRV is surrounded by rushing water and I need to throw him a life preserver. I assume we’re off to purchase some lumber and find a captain by the name of Noah.

At least part of my lottery wish may come true.