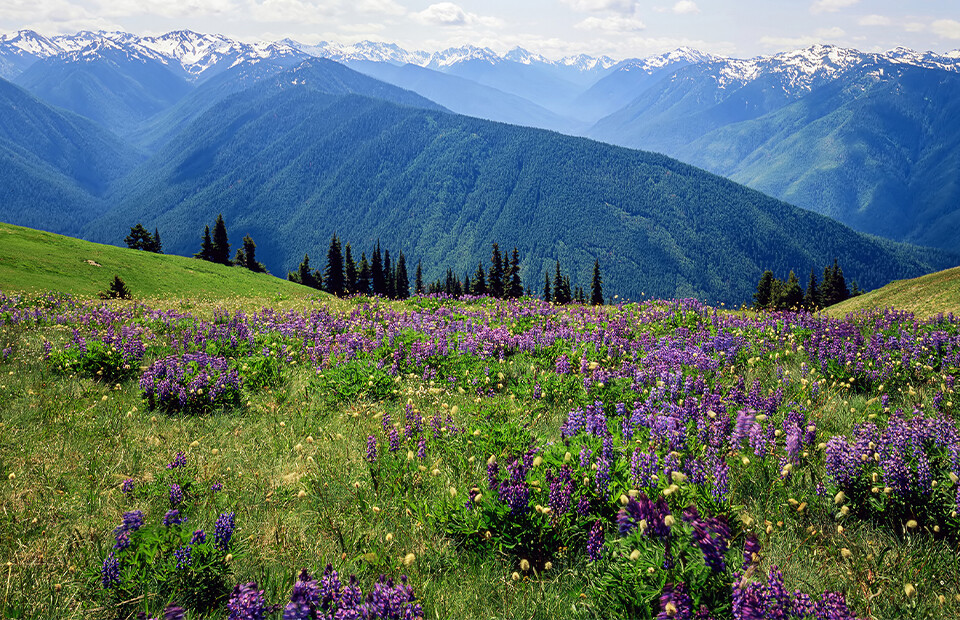 Fantastic Scenic Drives in the USA

We all love a good road trip. What’s better, particularly with flying a little challenging, than loading up in a car and driving somewhere new? Check out these wonderful scenic drives in the USA.

Scenic drives in the USA are a little different. We’re talking driving for the sake of driving, journeys that don’t have a destination, but instead offer beautiful views and new perspectives, giving passengers a chance to meditate as the surroundings slip by. As Alain de Botton says, “Journeys are the midwives of thought,” and few pastimes offer such opportunities to cogitate like a pop philosopher.

The quickest way between Vancouver and Seattle is the I-5. But like any direct route, the fast food–ridden freeway can get monotonous. So detour for a few miles along Chuckanut Drive, which laces its way along the coast between Chuckanut Mountain and Puget Sound past locally owned cafés, a generous handful of parkable viewpoints, and Bat Caves trailhead (a wooded path winds down to the flying creatures’ rocky home).

Completing the whole of this curvey coastal 101 route in one day wouldn’t be fun (it’d take you hours), but the scenic drive can be taken in smaller doses. Start at Garibaldi, a 90-minute drive from Portland, then head north to Astoria in Oregon’s northwest corner, passing artsy Cannon Beach, wildlife hot spot Ecola State Park (also great for tidepooling, hiking, and surfing), and another outdoor recreation favorite, Nehalam Bay State Park. Or turn south, visiting Tillamook (home to the eponymous creamery) before heading west along the Trees to Sea scenic byway and then south for the Three Capes Scenic Loop. End with a beer on the beach at Pelican Brewery in Pacific City.

Hurricane Ridge is the most accessible mountain area in the near-million-acre wilderness of Olympic National Park, offering memorable views without overly technical driving (although it’s often closed in the winter).

You have to pay for this drive, but it’s worth it. Your $10.50 gets you more than a dozen miles of circuitous roads winding between Monterey cypress trees along California’s surf-drenched rugged coast near the equally pretty town of Carmel. Lone Cypress is a popular spot, but there are numerous places to pull off the road. The coastline further north, in Pacific Grove, is another (free) scenic drive worth an hour or so.

Colorado has 26 scenic and historic byways, but Los Caminos Antiguos is among the state’s most memorable. Winding its way through the San Luis Valley, it passes Great Sand Dunes National Park and Preserve (where you can slide down 750-foot dunes on a disk) and Fort Garland, a historic military outpost with an exhibit that describes the role of African American soldiers in the expansion of the West.

Other scenic road trip options in the West include a stretch of the famous Highway 1 on California’s Mendocino Coast and the Beartooth Highway that stretches from Montana to Wyoming.

This is another long one, but pick a stretch and you can’t go wrong—particularly in fall when the leafy backdrop is painted shades of red, orange, and yellow. Running from Vermont’s Green Mountains to New Hampshire’s White Mountains, on both sides of the Connecticut River and past 53 communities and 10 waypoint centers, it’s Vermont’s only designated National Byway.

Starting in Port Jervis, about a 90-minute drive out of New York City, and snaking along a mountain ridge by the Delaware River, this scenic drive commands you to slow down and enjoy it—due to both the views of the wooded cliffs tumbling into the river and the winding nature of the section of State Route 97 it follows. Continue all the way up to tiny Hancock, where you can get out and kayak down a stretch of the river for another view.

Rolling hills, pristine woodlands that come into their own during fall, quaint New England towns, colonial farms—this short ride has it all. Running north to south through the northeastern portion of the state known as the Quiet Corner, it’s a calm, peaceful drive that’s part of the undeveloped and rural Last Green Valley National Heritage Corridor.

Running from Miami all the way south and west to the tip of the Florida Keys, this stretch of U.S. Route 1 follows the course of the historic Florida and East Coast Railroad. A hurricane knocked out the tracks in 1935, but a few years later the road reopened as a highway, often suspended high above the archipelago of some 1,600 islands, that whisks visitors past palm trees, beaches, coral reefs, and crocodile habitats.

A short drive out of Austin, Loop 360 gives you a whistlestop look at Texas Hill Country, with views of the state Capitol and the University of Texas, as well as a crossing over the Colorado River on the striking Pennybacker Bridge. It gets busy at rush hour, so plan your drive outside the usual commuting hours. It’s accompanied by a bike trail, too.

The Louisiana Byways program includes 19 scenic drives, taking in all the state’s famous signposts: bayous, live oaks, and more than a few alligators. This trip, though, winds its way through the Kisatchie National Forest, passing the eponymous pine trees and a rockier terrain of mesas and buttes, as well as plenty of opportunities for hiking if you need to stretch those legs.

Looking for longer road trips in the South? Set the nav for 200 miles of Texas Hill Country or try Alabama and Georgia’s Civil Rights Trail.

Chicago’s Lake Shore Drive is a must for architecture fans who like their buildings complemented with parks and beaches. Following the contours of Lake Michigan, it’s a scenic drive featured in several movies (Ferris Bueller’s Day Off, The Blues Brothers) and best driven northwards. The Chicago Lakefront Trail is a mixed-use walking and cycling path if you want to see it all at a slower pace.

Another scenic drive that’s particularly pretty in the fall, the Lake Superior Byway follows the southern shoreline of its namesake lake, through the Gaylord Nelson Wilderness Area, taking in several sandy beaches and cute harbor towns along the way. The Apostle Islands National Lakeshore is here, too, a small archipelago with one inhabited island (Madeline). Hire a boat or a kayak and explore the sea caves, which turn into magical ice caves in winter.

With the Crazy Horse Memorial, Mount Rushmore, and Badlands National Park, South Dakota is home to plenty of impressive sights set among memorable scenery. But for a truly stunning drive, try the Peter Norbeck National Scenic Byway, which curves its way through granite tunnels and around pigtail bridges as it passes through both Custer State Park and Black Elk National Wilderness Area before passing the famous presidential faces.

Travel Advisor. Experience Expert. Dream Destination Coordinator. “Traveling – it leaves you speechless, then turns you into a storyteller.” - Ibn Battuta. A beautiful quote that just begs the question, “What stories do you want to begin?” Is it time for you to create a new and memorable adventure for yourself, your family, your team, and your life? With more than 25 years coordinating dream destination weddings, picture-perfect honeymoons, and story-inspiring vacations sending clients all over the world, I’ve got everything you need to write your next story. With a traveler’s heart and a business mind, I can elevate your experiences with a savvy eye on a budget – big, small, and everything in between. Many people believe they can save a bundle by taking the DIY approach to deliberating over travel plans via internet “deals” and emailed “bargains”. That’s not the usual case. The old adage, “if it’s too good to be true…” rings true too often. However, working with a seasoned professional with provider insights, industry connections, and upper-level access to real offers, you can create the itinerary and experience you want at the budget that works for you with less stress, more surety, and none of the “travel surprises” that can send blood pressure soaring! Here’s how I can assist you: •Family vacations •Honeymoons •Destination Weddings •Adult Only Vacations •River and Ocean Cruises •Luxury Travel •Adventure Travel •Culinary and Wine Travel With me, you’ll have extensive training and experience on your side and peace of mind knowing I will help ensure your vacation or destination travel plans are flawless. Part of my job is reassuring clients that they have someone in their corner, especially when traveling with today’s ever-changing rules and restrictions. Allowing an expert to take care of things for you is a guaranteed, more confident way to enjoy your vacation experience. I am a destination specialist for Costa Rica, Hawaii, England, Germany, Switzerland, Mexico, the Caribbean, South Africa, and Guatemala -- just to name a few. Let’s plan your next culinary, golf, hiking, biking, Irish pub crawls, private yacht, villa, spa, luxury, castle, cruise, reunion, singles, safari, or romantic adventure today. It’s a story in the making!