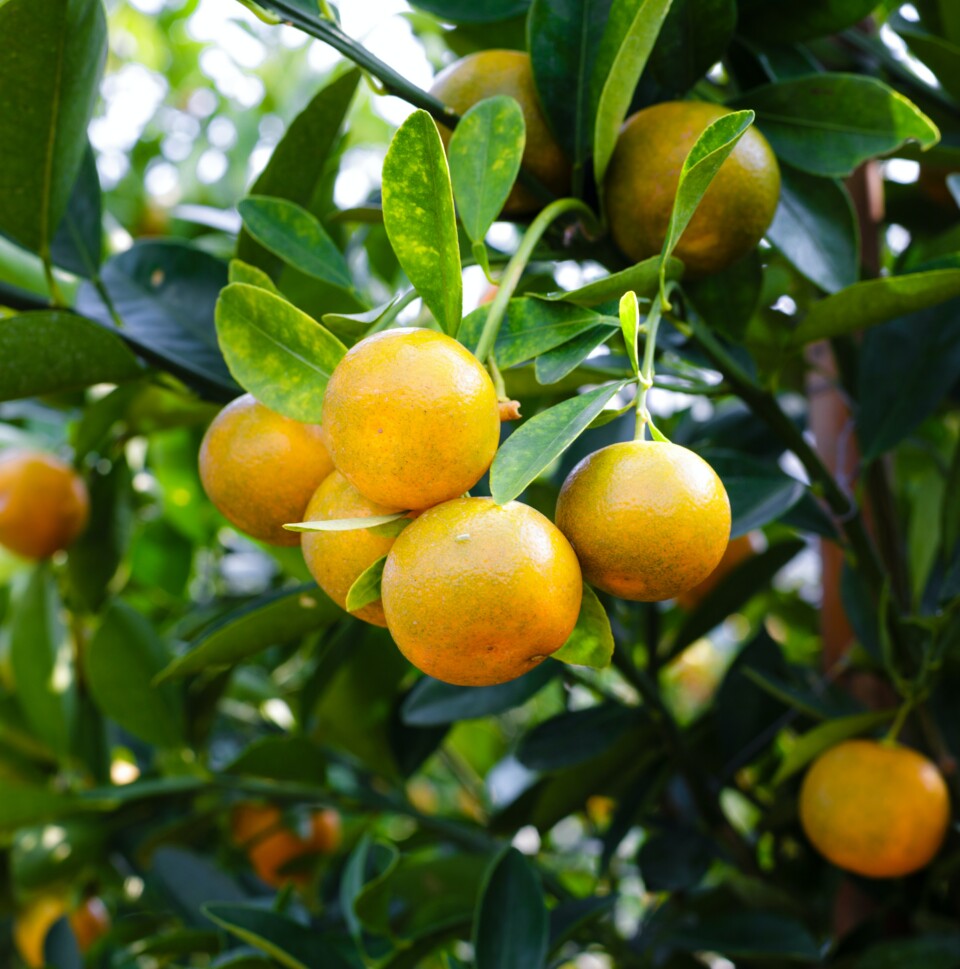 When I lived in California and was used to buying perfectly orange oranges, one day I walked into the produce section of the supermarket and discovered that the oranges were all greenish. “What’s the matter with them?” I asked the produce man, dismayed.

“There’s nothing wrong with them,” he said. “In fact, they’re really sweet and juicy. It’s just that they’re from Florida. Here, try one.” He took out a knife and cut one up. It was good, really good. I was pleasantly surprised.

Then I went to Florida on a working vacation that lasted seven years. At the market on the farm where I worked, I learned that many customers knew little about fresh produce and citrus, how to select, store, and prepare them. Some didn’t even know what the thing was. So, I wrote a series of essays, including recipes, called “What Should I Do With This Green Thing?”

Since in October we’re entering peak citrus season in the United States, in this magazine monthly series I’ll start with oranges grown mostly in California and Florida.

Like any other fruit, the juiciest citrus are the ones that are heaviest for their size. Also, look for citrus that has smooth, thin skin. The thickness of the skin varies according to variety. It also varies relative to regional soil and climate. In California, where the climate is dry, citrus tends to be thicker-skinned and less juicy than citrus of Florida, where it rains a lot; but the thicker-skinned citrus is easier to peel, such as the California Navel orange, preferred by most people to the Florida Navel, which is difficult to peel; whereas the Florida Valencia is thinner-skinned and juicier, therefore more commonly used for juice than the California Valencia.

Ripeness is not determined by color. Cold nights bring out the color in citrus. You’ve probably noticed that California oranges tend to be really orange. No, they’re not dyed. This is their natural color, brought out by the cool California nights.

Florida nights are warmer than California nights until about December. So early Florida citrus, including grapefruit, tend to have greenish skins, especially the earliest varieties. At the farm market, we got some ambersweet oranges one year, an early-season variety. They were greener than the greenest lime. They looked really funny. Of course, all the customers were incredulous that these green oranges could be so green yet taste so good.

To serve citrus sectioned with the seeds removed, do this: Cut off both the top and the bottom of the fruit, then turn it and cut it in half lengthwise. Next, take one of the halves and cut a lengthwise V in the center, cutting out the seeds. Do the same with the other half. See? Easy. If you’ve got a third half, you’ve got a problem. Now section the halves. This is much easier to do with the skin on. You can peel it afterward.

Next month, the many varieties of oranges, mandarins, and hybrids, from riddled with seeds to seedless.